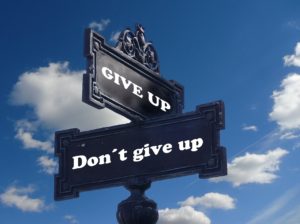 Not only do attractive mentors draw followers and strong mentors show us how to live, but also faithful mentors give us hope to keep on trying when we are tempted to give up. Remember the children’s song about the wise men? I show them how to sing and do the hand signals at the same time. Then they have the courage to do something that sounds hard to do; they believe it may be possible for them to do it because they saw me do it first!

All of us pass through those valleys where we really need to find some hope. I know I often do. At times I have felt that if any one in the world has the right to throw in the towel it’s got to be me! Nobody, but nobody, I tell myself, has gone through anything like this. Pressure at work and stress at home. Betrayed by friends. Hurt by the church. Back-stabbed by respected leaders. Disillusioned with them, and with myself – even disillusioned with God! So what’s the use? Besides, I am stuck in this intimidating and spirit-numbing secular environment most of my waking hours every day with virtually zero spiritual input. I, alone, Lord have a right to throw in the towel.”

She feels the pain of many people’s problems – but has not grown callused. In fact she touches her world with more tenderness and compassion than ever.
He may have used, burned, hurt and betrayed – but he is not cynical or disillusioned, and smiles even more broadly on horizons that glow with increasing hope.

She has seen a long line of shoulders convulsed with sobs, wiped tears from so many sad eyes and her own heart is often broken -still her face glows with joy.

Even though he has heard it all – yet he listens more intently and cares more deeply than at any time in his life.

But don’t stop there. Look back down the trail to someone who has not come as far as you have. You need not be a saint, nor a paragon of success. Nor need you be a wise old sage. Just pull up beside someone who has not walked as far as you, and who wants you in his or her life, and walk besides him or her. Let them know of the blows you have taken. Of the times you were discouraged or betrayed or wounded. Of the days you almost quit. And give them hope that they can surely come as far as you.

A thin but powerful book can help you be intentional and effective. And help you step around some of the pitfalls early stage mentors often fall into. And give you a map, a recipe, some 1,2,3’s to get you started: Mentoring: How to Invest Your Life in Others, by Tim Elmore.