One Life Shapes Another 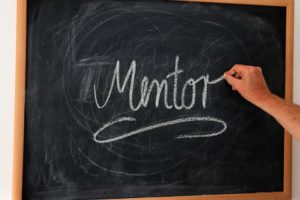 Ted moves like an athlete and looks like one too. He is usually confident and assertive. But today, sitting in front of the counselor he seems different. Ted is a new Christian and the father of sons four and seven and he has hit a wall. “I don’t really know what a good father is supposed to look like. I don’t know how to show affection or to be approachable. I want to connect with my wife and kids and listen to them. I want to build their self-esteem and lead them spiritually. But it seems like every time I try I either freeze up or mess up.

Although my father and mother lived together for sixteen years of my life, I never really knew my father. He never put his arm around my mother or said that he loved us. He rarely talked to me, didn’t listen to me. And he never hugged me at all. In fact the only times he ever touched me was when he whipped me. Who can I watch so I don’t wind up doing to my family what my Dad did to me?

Ted is asking for a mentor!

Sally is strikingly attractive, always gregarious and out-going, but she still doesn’t seem to have close friends. Her kids always look bright and neat – but a bit stiff. When the office door closed, things begin to tumble out. “I don’t know what to do. I love my kids. But I’m scared because what I am doing to my children comes fearfully close to child abuse. Usually, I am a good mother. But, when I’m under pressure and the kids drive me up the wall I revert and do to them what Mom did to me!”

Sally wants a mentor, too!

Jim is two years into his second pulpit ministry. The first one didn’t last three years. He is gifted, charming and definitely not lazy. But something isn’t working for him. He calls an old preacher he knew from college days, “In my heart I want to be different kind of preacher, a tender servant. My people deserve something better than what I am giving them. But all I saw growing up looked like flashy, cocky, dogmatic manipulators. Where do I go to learn a different way?”

Sue and Jerry are thirty-something and not only realize that if their church has a future, people like them are going to have to shoulder more of the responsibility. Besides, they feel God’s tug on their hearts. “We would love to become genuine helpful spiritual leaders, but the only elders we knew seemed like distant men who only occasionally emerged from their `smoke-filled rooms’ with sour looks on their faces and handed down another edict or scolding for the congregation.”

When we don’t find positive mentors, negative ones often find us, by default.

Will Sue and Jerry find a mentor?

Who hasn’t longed for some sort of healthy role model? We naturally tend to become like our role models – even when we don’t want to, it seems. This is how human nature works.

Cultural anthropologists tell us that almost every society has had “elders” or mentors of some kind. Whether they be tribal chieftains, village head-men, clan leaders or family patriarchs – most every social unit across history and around the globe has had official adult role models or Wisdom Figures. These are older, more experienced, stronger members of the group to whom the younger look for identity. This phenomenon is conspicuously absent from modern America, at least in visible and formal social structures. But informally, sometimes even subconsciously we long for mentors and we do better when we have them.

The excerpts quoted above are example of this. And when we don’t find positive mentors, negative ones often find us, by default.

Erik Erickson, well-know pioneer if the field of developmental psychology, is often credited with first tagging these role-modeling persons Mentors. Of course Erickson and the rest of us borrow this term from ancient Greek Mythology. Mentor was Odysseus’ trusted counselor, under whose disguise Athena became the guardian and teacher of Telemachus. In Latin and Greek both, the term literally came to mean “adviser” or “wise-man.” In later literary and philosophical circles the term meant one who broke new ground or who set new trends such as, “Moore and Kierkegaard have become mentors of two different philosophic movements.”

Now the term mentor has come into broad popular use as a more personal and intensified hands-on role model.

Erickson, held that the mentoring phenomenon is written into the psychological make-up of human beings; that mentors are essential to healthy human development. He emphasizes that good mentors are especially crucial for males from the age of four to six. On a popular level, Poet Robert Bligh, guru of a new men’s movement and author of Iron John underscores the crucial significance of mentors and says that “A boy cannot become a man without the help of another man. It may even be a man who is dead.” Of course the same is true for females. Little girls often stumble around in a pair of Mom’s over-size shoes and dragging dress, talking to her dolly the way mommy talks to her. And most of today’s professional women are shaped at least in part by an admired female professional role model.

Time has never been more ready for Christian leaders to tap in on the power of mentoring.

Whether for men or women thoughtful people in most professions recognize mentor is a key concept. A young lawyer usually emulates some older lawyer. A lot of physicians are in medicine because of some doctor in his or her circle of significant others.

In character and faith development the power of mentors is even more important. Time has never been more ready for Christian leaders to tap in on the power of mentoring. Why not become a mentor. You can begin now forming your GGTW list (Guys and Gals To Watch). Intentionally begin noting specific people with whom you have respect and influence and in whom you see a teachable spirit, and who might want you in their life. Watch to for the right way and time to pull up beside them and begin pouring the contents of your soul into them.

If we are to grow spiritually, all of us must seek mentors as well. As the scripture says, “Appreciate your pastoral leaders who gave you the Word of God. Take a good look at the way they live, and let their faithfulness instruct you, as well as their truthfulness.” (Hebrews 13:7 The Message)