This post is a continuation of our previous posts about a TED talk. (part 1, part 2)

Simon Sinek, having addressed the idea that “people don’t buy what you do; they buy what you believe,” moves on in his TED talk about inspiring leadership to teach me something else about church.

He speaks to the (unfortunately named) “Law of Diffusion of Innovation”—an explanation of how people are inspired to change, to adopt something new, to embrace innovation. Change doesn’t happen to all people in the same way and at the same time. Change has to crawl and crest before it finally conquers.

To illustrate this notion, Sinek introduces us to our old friend … the Bell Curve. [Warning: more detail about statistics ahead than you probably want to know. Keep reading … there is worthwhile point to be made.] 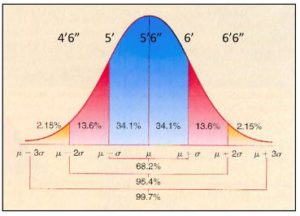 In any normal distribution, populations fall within statistically-defined norms. Let’s use “height” as an example. Say the average height of human adult is 5’6”. 50% of the population will fall below that height (shorter than 5’6”). 50% will stand above that height (taller than 5’6”). (Statistically speaking, no one is allowed to be exactly average!) Most people (just over two thirds—68.2%) will be only slightly shorter or taller (within, say, 6 inches of average). 95.4% of the populations will vary from the average height by less than a foot. Only 2.15% of people will be either significantly shorter (less than 4’6”) or significantly taller (over 6’6”). There is an average height for adults, and most people vary from it by only a few inches.

Sinek takes the Bell Curve and applies it to people who are invited to change, to adopt novel ideas or behaviors, to think and act differently. According to Sinek, the distribution of this population looks exactly the same. 50% of a given population will welcome change to some degree … 50% will resist it. 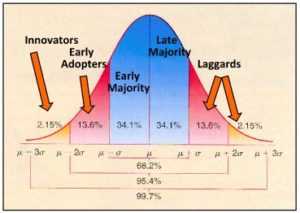 Of those who accept change more easily, a small sliver (the Innovators) actually drives change and forms the cutting edge of the future. Another minority (13.6%) can be expected to embrace change early and enthusiastically. The largest group favorably disposed to change is comprised of the “Early Majority”—those who accept change if they have good role models and good reasons for doing so.

On the other hand, there are those who prove more resistant to change. The “Late Majority” adopts change only when change is seen to be inevitable. They prefer the status quo and do not like the disruption of new ways of thinking and acting. But they eventually yield when they see friends leading the way and become convinced new ways are unavoidable. The remainder (the “Laggards”) come to change only kicking and screaming. (In Sinek’s words, these are the people who would still be using rotary phones if anyone still manufactured and sold them!)

Change and the Church

In my experience, this Bell Curve describes what we experience when dealing with change in the church. We can anticipate that half of our members will be open (to some degree) to changes in thinking or action. They need encouragement and reasons (as we will discuss below). But they are not opposed to change per se.

Of those open to change, a small sliver actually drives changes. These are the (dreaded) “change agents” who question the status quo and dare to value mission and effectiveness above tradition and comfort zones. A larger segment (the “Early Adopters”) see the need for change, are eager for change, and need only to be shown new ways of thinking and acting that are reasonable. They are not “faddists” (though they are often accused of this). Rather, they tend to focus on the future and recognize that the church needs to reinvent itself on occasion to stay current and relevant.

The largest segment of church members open to change (the “Early Majority”) don’t come to change quickly or reflexively. They demand that changes be discussed, tested, and evaluated. They want to see changes that work before embracing those changes whole-heartedly. They will tolerate some experimentation and even a certain degree of failure. But before adopting changes personally and permanently, they need good reasons and strong leadership and effective role models.

On the flip side, half of church members can be expected to offer some level of resistance to change. This segment of our churches is (by definition) more conservative and more wed to the status quo. It is not that these brothers and sisters don’t care about the church’s mission.

Half of church members can be expected to offer some level of resistance to change.
It is, rather, that they closely identify the church’s mission with the church’s tradition—“We are what we do.” Change—threatening as it is, inevitably, to what we do—represents for these people an attack on the church’s identity and faithfulness.

Still, the majority of this other half of our congregations can be persuaded to adopt change eventually if:

Inevitably, however, there is a segment of every church that will fight change tooth and toenail. No amount of reasoning, no amount of patience, will result in a graceful acquiescence to change. The only way change will be endured is if other options (like the rotary-dial phone) are taken off the table. Even then, some will take their rotary phones and go elsewhere. Of those who remain, we can expect a certain level of unhappiness and carping to continue with every exposure to new ways of thinking and doing.