We have not stopped praying for you and asking God to fill you with the knowledge of his will through all spiritual wisdom and understanding. And we pray this in order that you may live a life worthy of the Lord and may please him in every way: bearing fruit in every good work, growing in the knowledge of God, being strengthened with all power according to his glorious might so that you may have great endurance and patience, and joyfully giving thanks to the Father, who has qualified you to share in the inheritance of the saints in the kingdom of light (Colossians 1:9b-12, NIV). 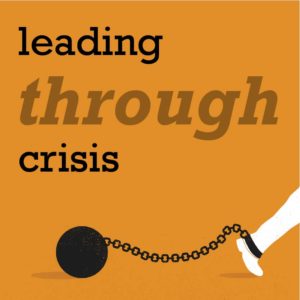 It happens to leaders all the time. When leaders in a church face a crisis, all attention and energy goes into “solving” the problem as quickly as possible–only to discover that the quick fix led to even greater problems.

I was an elder long enough to understand why any church leader wants to minimize the agony created by a church conflict, improper actions of a minister, or the threat of a group of members leaving the church. You would not have to look far to find churches that have suffered serious decline because they failed to see past the crisis.

As all pilots know, you continue to fly the plane while you address a crisis in flight. Otherwise, you might find a quick fix but crash the plane!

I hear in Paul’s prayer for the young church at Colossae a call for greater endurance and patience for something that will not come quickly. Waiting for the spirit to give wisdom, living a life worthy, waiting for the fruit that God provides and anticipation of an inheritance all take the long healthy view of the church. I hear him calling them to endure faithful, not find quick fixes for success. In doing so they would have reason to thank God for the victory–in his own time.

As a school administrator, a church leader, and a church consultant, I have found principle-centered leadership provides wisdom to create a healthy context for growth as well as for coping with challenges. Following are three principles that have served me well in approaching a church crisis.

One principle that will eventually come to leaders through years of experience is that there are no quick fixes in ministry. That’s right!

When I say this to leaders in crisis management mode they want to ignore it, and I understand why. The pain screams louder than reason. They have exhausted all their resources. Less experienced leaders may not even believe it–they still think every problem has a solution and they don’t need such pessimistic advice.

Worse yet, they assume the church could be exempt from problems and once the storm passes, all will be well. When an estimated two of every five churches have a major conflict in any five-year period (like a threat to the unity of the leaders, moral failure of a leader, or a spiritual attack on the church), it would be advisable to expect problems rather than avoid them. Spiritual leaders anticipate and wisely prepare for conflict.[1]

A second principle assumes that most declining churches fail to grow because they are over-managed and under-led. The systemic problem often starts in a crisis and leaders get stuck in crisis management so long that it unknowingly shapes the culture. This church culture narrows its mission to avoiding a crisis, so any crisis becomes a threat to their mission rather than an opportunity to grow spiritually. In such a church culture, trust becomes a casualty. The loss of trust among the elders, between elders and staff, or between leaders and major groups within the congregation will need to be reversed before another major crisis comes along.

People follow leaders they trust. Leaders try to manage people and situations they do not trust. Can we assume that in crisis, leaders manage and in “normal times” they lead? Really?!

The cross of Christ symbolizes the power of spiritual influence through crisis, not using power to manage a crisis. When does Paul attempt to manage problems as an apostle? If he used apostolic power, his letters would have been very short. On the contrary, he went to great pains to exercise powerful spiritual influence in times of crisis in Corinth, Ephesus, Colossae, and Rome. As in Romans, he used an extended rhetorical argument that may not be clear to everyone when he could have given specific commands as an apostle.

Consider a third principle I find extremely helpful when relationships have been broken and the perceived peace of the church is threatened: when we judge ourselves by our intentions and others by their actions, we close the door to reconciliation and resolution to the problem. I adapted this from Covey, The Speed of Trust.[2]

At the heart of almost every conflict, you will find a loss of trust somewhere–even of God. So what makes a crisis a crisis? One way you know a crisis has developed is when you see people on all sides shifting problems into personal attacks and harsh judgments.

In the next article in this series, we will discuss the need for leaders to manage their own fears and emotions in a crisis – especially in relation to these three principles.