Texting as a Spiritual Discipline 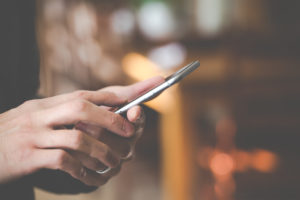 I’ve observed over the last 25 years that scapegoats are really popular. When I was growing up television was the major evil, blamed for all sorts of unhealthy human behaviors. Interestingly enough, in college, as a communication major, my research revealed that television wasn’t the first scapegoat. Movies preceded television. Radio preceded movies. Comic books preceded radio. The written word preceded radio. You doubt? It was against the law for the Bible to be printed in the common language until later in the 1500s for many reasons, including the fear that people simply couldn’t handle it. The punishment was often death.

Of course in the last 15 years, the phone is the king of the scapegoats, possibly with 24/7 news programs coming in at a distant second. Our phones are equipped with all kinds of scapegoat paraphernalia including Facebook, text, email, internet, games…. That list could go on for infinity.

I don’t deny that there is a plethora of bad behavior and our mass communication capabilities change how the world consumes that information. However, I would like to challenge the usefulness of the scapegoat mentality. Does blaming the phone for bad behavior, broken relationships, or conflict avoidance help us or just make us feel better by placing the responsibility on the phone? I submit to you that the phone is a tool, just like communication itself is a tool. Every tool can build or destroy, and it’s always the human behavior that determines the choice.

Because texting is noninvasive, it is a great way to check in with people frequently, and this is really critical.

My work as connections minister involves working with new people and it’s my favorite part of my job. I love meeting new people, inviting them to lunch, having them over for dinner at my house, getting to know them, and watching them plug into our church family. Interestingly enough, I find that texting is an integral part of how I stay connected. I’ve actually tripped into a new spiritual discipline.

Because texting is noninvasive, it is a great way to check in with people frequently, and this is really critical. Because of work and travel schedules, I might not see new people on a regular basis. In fact, I probably won’t. A positive Sunday conversation does not mean this person will ever come back. That positive experience on Sunday is a super important first step, but only a first step. However, if I can schedule a lunch or coffee and then just keep touching base consistently, then we have a chance to build a relationship and I can begin to connect them with other parts of our church family life. The relationship is what will make or break the future of this person joining our church family.

I can’t take everyone to lunch every week or have everyone to dinner at my house every week. But I can text them every week and I pretty much do. What I find is that I usually get an appreciative response to a simple text like this: “Hey, just checking in to see how your week is going.” If the person is chatty, great. We will exchange a few lines. If not, then this person still knows I’m reaching out and this is the most important thing. Chatty or not, I always ask if there is something I can be praying about. I find that even the most committed introverts will share prayer requests through text when they might not do so face-to-face. This is how I discovered texting as a spiritual discipline. Every time I text someone, I end up praying for them and I love that. I have found this new habit leads me to pray more period, even for people who are kind of random, like my mail carrier or a restaurant server. I think praying for people whom I don’t know very well has simply made me more aware of the many people around me that I don’t know very well and that I want them to see God working in their lives too. I find these text prayers are composed a little differently, for one thing shorter. The accumulation of small things is not small though. Consider snow. So for me, I’m spending more time in prayer, and hopefully building relationships. For my new friends, someone new is consistently and sincerely praying for them.

I’m sure phones will continue to be the scapegoat until the next thing comes along. I personally think Jesus would text if he thought that would bring someone into a relationship with him. After all, In Luke 19, when he left Zacchaeus’s house, “Jesus said to him, “Today salvation has come to this house, because this man, too, is a son of Abraham. For the Son of Man came to seek and to save the lost.” I like to imagine that if Jesus had the chance he would text Zacchaeus pretty often and say, “Hey, just checking to see how your week is going.” That wouldn’t be the only thing Jesus would do, of course, and it’s certainly not the only thing I do. Tools are just tools. They can build or destroy. I find texting to be a valuable tool to connect with people and a great catalyst for prayer and connection. I don’t know that I can make the same argument for Bitmojis, but you never know.

This article was previously published on CHARIS