The Vanguard Principle for Leaders 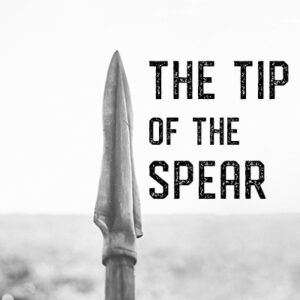 Near the end of the movie The Patriot, in the climactic battle scene between the British forces and the American Continental Army, two leadership styles emerge. British General Lord Cornwallis and his junior commanders sit safely atop their mounts at the rear of the battlefield. Mel Gibson’s character, Benjamin Martin leads a rag-tag militia that has been placed at the center of the American line. As the battle ensues, the Americans appear to be overwhelmed and their line begins to falter. When Martin sees one of the flag-bearers retreating, he grabs the flag and with heroic courage calls out, “Hold the line!” As he runs forward into the thick of the battle he inspires his soldiers to follow – leading them to win the battle.

Kingdom leaders must be on the frontline modeling for others how to live the way of Christ.

Historically, a vanguard is an advanced military unit of elite, battle-hardened soldiers. Commanders used the vanguard as the first unit to engage the enemy – the tip of the spear. Because of this, they needed to be courageous and highly skilled. Tasked with breaking through the enemy line. They were the soldiers other soldiers followed.

The Vanguard Principle of Leadership is Leaders Go First. Unlike the British commanders who directed the battle safely at a distance, Kingdom leaders must be on the frontline modeling for others how to live the way of Christ. Consider the Apostle Paul’s words:

I am writing this not to shame you but to warn you as my dear children. Even if you had ten thousand guardians in Christ, you do not have many fathers, for in Christ Jesus I became your father through the gospel. Therefore, I urge you to imitate me. For this reason, I have sent to you Timothy, my son whom I love, who is faithful in the Lord. He will remind you of my way of life in Christ Jesus, which agrees with what I teach everywhere in every church. (1 Cor 4:14-17, NIV)

The apostle Paul urges the disciples in Corinth to “to imitate me.”  To say this, he had to be confident they had seen him model the life of a disciple. Further, he sends Timothy who will remind you of my way of life in Christ Jesus. Not only must they have witnessed Paul enough to imitate him, Paul expects them to be familiar enough with his way of life in Christ Jesus to recognize it in Timothy when he arrives – providing them with another leader to imitate.

While many of our concerns as 21st Century church leaders revolve around matters of worship, church attendance and those who are sick, we miss this more fundamental concern of modeling the Christian life for those who we lead. This is especially true when it comes to matters of service, evangelism, and practices of discipleship.

The Vanguard Principle is an extension of the theology of the Incarnation. That is, God did not merely create a way for humans to live in relationship with him. He came in Christ and modeled it. Throughout the Gospel of John, Jesus says repeatedly, …as I have…so you… suggesting that Jesus blazed the trail he wanted his disciples to follow. Jesus knew that teaching and telling were not enough, he knew they needed a life to imitate. Twenty-first Century disciples still need examples to follow – and like the disciples, people will follow if we are willing to lead.

In an age when the Christian faith is routinely questioned and our neighbors fail to see the value in following Christ, it is more important than ever that the leaders of the church embody The Vanguard Principle, take their place in the Mission of God, and lead by saying to a new generation, Come, follow me (Mt 4:19, Mk 1:17).

Tod Vogt has served as Mission Alive’s Executive Director since January 2015.  In his role he works with the board of directors and the Mission Alive team to form the vision and ministry strategy to help Mission Alive accomplish its mission.  He works with church planters and church leaders to develop disciple-making churches. Tod specializes in leadership coaching, spiritual formation and leadership dynamics and development.