A friend tells me that a visitor to his church remarked after a couple of encounters with Jake, “So you say that guy Jake has been pretty visible in your church for a long time? Here every time the doors are opened? A deacon! Well, if Jake is an example of what Jesus does to people, you can color me Buddhist!” 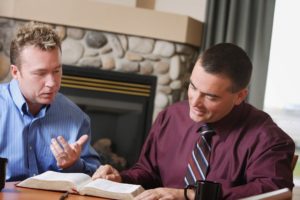 No doubt every good ‘church goin’ Christian’ has met his or her version of Jake. Oh, yes, age and experience do not necessarily make one spiritually attractive. Just the fact that Jake has been over more trail than I have does not necessarily make him a compelling mentor.” My friend describes Jake, one of the older deacons in his church as “The grand Marshall of the Foyer and the first line of defense against visitors.” Even though Jake’s body had logged a lot of miles on his “religion odometer,” he wasn’t exactly a spiritual luxury limo delivering passengers to the feet of Jesus! What we are teaches far more than what we say and this truth can work to bless the church as well as to harm. So let’s take a glimpse at how to be a positive, spiritual mentor.

What we are teaches far more than what we say and this truth can work to bless the church as well as to harm.

Winsome mentors are the kind of people who make you want to be like them. ‘Winsome’ according to Webster, means “generally pleasing and engaging.” Surely most of know people like this. Several winsome mentors have blessed me mightily. One was the man who baptized me — J. C. Bailey, who, even when he was 95 years of age was still burning with internal fire. Even in recent decades, this man of rugged constitution and iron will could work men half his age into the ground. After forty years of evangelism and church planting in Canada, Bailey, then over sixty years of age, launched into a new chapter of ministry as a missionary to India – where he has led thousands of people to Christ and planted hundreds of churches. This unusual man has been honored for his mission work by several universities, Christian colleges, and Bible training schools.

Not only was he a great man of faith and passion for evangelism, he was also a colorful character, with a magnetic personality that lit up every room he walked into. When J.C. was in fine fettle, full flight and rare form he was one of the most powerful preachers and storytellers I have ever heard—and I’ve heard a lot.

I wanted to be like J.C. from the first time I ever saw him. A striking trait that punctuates Bailey’s impressive visage was the pair of heavy bushy brows riding above his piercing eyes. The brows dance and twist with every shift of expression, nearly mesmerized me as a child. I remembering often sneaking a peak in the mirror to see if my eyebrows were getting heavy enough so that I could preach like Bailey!

Later, other preachers fueled my heart for ministry. Just two of these are Charles Coil and Wesley Jones. Charles Coil was a man of absolute integrity, fiery evangelism, and deep compassion. He was also one of the most convicting preachers and compelling storytellers I have ever known. He mentored me in the early days of my preaching as a friend and as the minister of a church that supported Carolyn and me in mission work for eleven years. Later he founded International Bible College. Charles went to be with the Lord.

Wesley Jones planted a church in Canada and his influence as an evangelist was widely felt there. He later served as a missionary and church planter in Indonesia and then in Russia. He took special interest in me when I was a young church planter. Wesley even made the long trip across Canada in 1967, from Ontario to British Columbia, to encourage and mentor me and to speak in a massive evangelistic crusade we launched. We stayed in close touch across some two decades and attended the World Congress on Evangelism together in 1989. Even later, when we would communicate, we would simply pick up where we left off—though months or years may have passed.

Wesley battled cancer,  but  still stayed up to his armpits in everyday ministry, with the same sparkle and verve as always. In 1966, he and his wife Beverly were honored at the Pepperdine University Bible lectures for the outstanding work in ministry.

Although very different men in temperament and personality, both Jones and Coil exuded a common gentle fire and warm affection, with pleasant countenance and deep character. I wanted to be like them, and I tried to imitate everything they said and did. I visited often in their homes and observed their every word and action. I very consciously attempted to treat my wife and my children in the attentive gentle ways they treated theirs. In the early years, I told and retold their stories and mimicked their mannerisms. In fact, although they first and most pivotally touched my life some thirty-five years ago, I still sometimes find myself carrying my Bible like Coil carried his and borrowing a Jones mannerism or expression. Who would I be had God not sent these winsome mentors my way?

He simply wanted to bring people to the foot of the Cross, into the footsteps of Jesus, and to the worship and adoration of a majestic and holy God.

Not all of our mentors live during our lifetimes. T.B. Larimore has influenced me more than “any man I never knew.” As a teenager, I heard J.C. Bailey tell Larimore stories. While still in high school, I began reading Larimore biographies and then, later, volumes of his letters and sermons. Larimore’s flights into enchanting and flawless oratory fired my imagination and drew me to him. His reverence before a transcendent God and his emphasis on big theological themes rather than debates on small issues set him apart from many preachers of his time. Larimore refused to “take sides” in the division threatening his fellowship at the turn of the century.

He chose rather to “walk between” and to love all the brethren to both left and right. He simply wanted to bring people to the foot of the Cross, into the footsteps of Jesus, and to the worship and adoration of a majestic and holy God. In my own heart of hearts, I have always wanted to emulate that. Larimore also balanced a love for the local church with a fellowship-wide vision and a passion for evangelism; he stirred my heart to walk the same preaching pathways. Oh, yes, “Brother Larimore” left his mark on me. He mentored me—and thousands of others—although he died seven years before I was born. What a winsome mentor.

Surely this is why God has given us winsome mentors who make us want to live the way they live. Believe it or not, some one wants to live the way you live! So we must ask ourselves: What legacy am I leaving? Am being intentional? Am I formulating my GGTW list? And we must also ask: who are my mentors? Who shapes me? Yes, my friend, we all need both to mentor and to be mentored.

I have explored mentoring in more detail in my book They Smell Like Sheep, Howard Pub. Co. 1998. And I heartily recommend Tim Elmore’s book, Mentoring; How to Invest Your Life in Others, Equip Publishers, Atlanta, GA as the best I have read on the subject.