Congregational Leadership in Anxious Times (Part 3): Being a Non-Anxious Presence 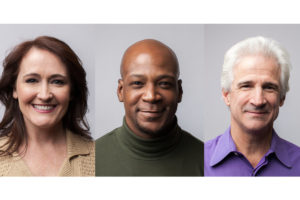 “Showing up” may be the first step of effective congregational leadership. But exuding a calm, principled, hopeful demeanor is the “other shoe” that has to fall.[i]

In times of crisis, members will be anxious enough for us all. If leaders allow themselves to be infected by such anxiety, if leaders become transmitters of such anxiety, they cease to lead in positive and healthy directions.

Perhaps the greatest example of this in Scripture is Aaron and the incident with the Golden Calf. Moses is absent—off on Mount Sinai with God. Aaron is the designated leader; he is present. The people are anxious. And Aaron permits himself to be infected by their anxiety. Instead of leading the people, Aaron relents to the people. Instead of acting in principled ways, Aaron reacts in an effort to defuse and placate. He authorizes a golden calf and watches as Israel bows before it. Aaron is an example of a leader who is present but anxious. Such leadership is not helpful. It is certainly not godly.

“Non-anxious leadership” is demonstrated when leaders commit to self-control, acknowledge but are not dominated by personal levels of anxiety, value reflection over reaction, tolerate a high degree of uncertainty and frustration and pain (in others and in themselves), and keep their eyes on the goal no matter how immediate or threatening the problem.

How do leaders stay non-anxious? Actually, at the emotional level, they don’t. Leaders are as prone to feelings of anxiety, panic, and despair as anyone else. Because they are so heavily invested, because they care so much, they may be more prone to worry and fear. The critical difference is that non-anxious leaders don’t let such feelings show … and they certainly don’t let such feelings control their words and behaviors. They find ways to rise above natural anxiety to stand on more thoughtful, principled ground.

Critical to “rising above” is the ability to differentiate yourself.

Belonging to a group (like a church) is one thing. Being consumed by the group, losing yourself to the group, melding with the group—that’s another thing entirely. Faithful, responsible membership in a group doesn’t mean you must drink the Kool-Aid. In fact, faithful and responsible membership requires that you not imbibe, that you resist “group think,” that you refuse to surrender your values and principles to the group, that you remain true to yourself even as you try to interact with and lead the group. Godly leaders don’t allow themselves to identify so closely with the church and its anxieties that, in the end, the church leads them.

Interestingly, the differentiated leader also knows the importance of staying connected to his/her followers. Differentiation doesn’t mean distance. Cutting off from the group, isolating from the group, is as dangerous to leadership as being enmeshed with the group. Nothing erodes leadership quite like reacting to difficult members by dismissing them or showing intolerance and apathy. If leaders make a habit of distancing themselves from difficult people, over time they will distance themselves from the entire group—for all of us are difficult at one point or another, over one issue or another.

Differentiated leaders are both self-aware and system-aware. They keep a finger on their own pulse and the pulse of the church. They recognize anxiety in themselves and others but are not ruled by it. They strive for an objective, balanced viewpoint unaffected by circumstances or the reactiveness of others. They do not allow themselves to be defined by the problems they face … or the pain and distress of the people they lead. They know who they are. They know what they value. They know where they’re going.

A Pause between Stimulus and Response

A second skill necessary to “rising above” normal anxieties is the ability to insert some time between stimulus and response.

Church leaders are constantly “stimulated” by events and people. News breaks. Confessions are made. Members panic. Life happens. Leaders are just as constantly required to respond—hopefully in healthy and helpful ways. But when leaders are committed to being wise and godly, something needs to happen between the eruption of a crisis (stimulus) and the actions of leaders (response). Some space must be permitted between learning of a problem (stimulus) and adopting a solution (response) so that good and godly things can occur.

By definition, reflexes minimize the time between stimulus and response: your doctor wants to see an immediate reaction when she strikes your patellar tendon. Anxious church members want to see the same thing. They want rapid decisions, rapid action, rapid solutions. They want leaders to do something now to ease their anxieties and alleviate their pain. They prefer reflex to reflection.

Anxiety demands action yesterday; peace persuades us there is yet time for discussion and consideration.

But leadership (particularly spiritual leadership) must never be reflexive. “Knee jerk” decision-making and instinctual reactions are almost always wrong-headed and wrong-hearted. They come from the primitive, fallen places in us. Leadership that intends to transcend human brokenness always benefits from a thoughtful lag between stimulus and response.

As a leader, do what you can to create that lag.

By inserting a pause between stimulus and response, church leaders protect themselves against “merely human” responses, give themselves time to discuss and reflect, and allow the Spirit to shape their thoughts and actions. Yes, anxious members will label such pauses as “an avoidance of leadership responsibilities.” Effective leaders understand, to the contrary, that these pauses are at the heart of godly, principled decision-making. Anxiety demands action yesterday; peace persuades us there is yet time for discussion and consideration.

Differentiation and a-little-breathing-room are necessary components to being a “non-anxious presence.” When the Bible speaks of self-control (in passages such as “The fruit of the Spirit is love, joy, peace, forbearance, kindness, goodness, faithfulness, gentleness and self-control” or “Make every effort to add to your faith goodness; and to goodness, knowledge; and to knowledge, self-control; and to self-control, perseverance”), it isn’t talking about restraining sexual or violent impulses. (Notice that “goodness” precedes self-control in each of the above examples and should cover immoral or angry tendencies.) Rather, the listing of “self-control” (especially in passages that address spiritual maturity and leadership) is intended to commend precisely the kind of non-anxious, principled, thoughtful presence discussed in this post.

[i] Once again, let me acknowledge my indebtedness in this series of articles to Peter Steinke and his book Congregational Leadership in Anxious Times.
Categories : Tim Woodroof
Tags : Conflict, Leadership Encouragement, Shepherds/Elders
← Previous Post
Next Post →