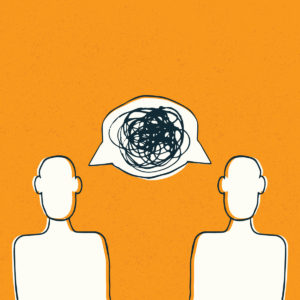 It was Saturday, with Sunday fast approaching. Due to travel and family emergencies, I was the last minister standing. Having several things to accomplish, while getting dressed, I texted my husband, Chuck, who was in the kitchen. “Can you take Hazel for ice cream or something so I can finish running errands by myself? I won’t finish if she is with me.”

Hazel is our six year old and most of the time, she hangs in there with me pretty well. However, on this day, I needed to move a little more quickly and, God forgive me, avoid answering 671 questions about what I was doing and why, with 374 of them asking for snacks. Chuck answered yes. Thank you!!!

But I wasn’t saying “thank you” for long, because I began receiving the major passive-aggressive treatment from Chuck which makes my head blow off my body, especially with extra duties on my to-do list. So I asked him what was going on but couldn’t get any clarity. He just seemed grouchy. He didn’t want to take her, but refused to let me take her when I offered. I even tried to overrule him and told her to get dressed and come with me. That was a big mistake and made the grouchiness escalate into straight-up anger. Okay, you had your chance. I’m leaving.

I tackled the to-do list, got everything finished and then went home. Speed is my spiritual gift, which is not quite as prestigious as prophesying, but has its advantages. When I got home, I didn’t want to be in a fight I didn’t understand, so I asked Chuck about the situation. He said he needed to work too and didn’t get his to-do list done because of taking Hazel to get the ice cream. He went on to say that sometimes I behave in a way that communicates that my work is more important than his.

How many relationships are damaged because of assumptions? All of them.

Now, at this point, the conversation could have taken a turn for the worse. Because, that statement that IIIIIIIIIIIIII act like my work is more important than his flew all over me. I didn’t like it one bit and could have shared evidence-o-plenty to prove just the opposite. In fact, right now, I could write a whole different article on that topic alone. Why didn’t I? Because my curiosity was stronger than my need to defend, at least on this day. I just really, truly didn’t get it. I asked for a video review of the referee’s decision.

So I asked him, “Then why did you say yes when I texted you?” He responded, “I thought you already told her I was going to take her to get ice cream.”

I hadn’t said anything to Hazel about the ice cream, hence the TEXT. I didn’t even want her to hear the words ice cream. I needed help so I asked for it, but didn’t presume a “yes,” and certainly wasn’t going to set up a guilt or coercion situation. I didn’t know what his schedule was that day and, in my mind, he had every right to say “no” to that last-minute request. I would have found a way to make things work, although it would have been a bit harder.

So, when I corrected the assumption, the tension left the room and once again, persistence paid off.

How many relationships are damaged because of assumptions? All of them. If I hadn’t been sincerely curious about what was going on, persistent in trying to solve the tiny mystery, that could have been a miserable night based upon a stupid misunderstanding. After 27 years of marriage, we would have gotten past it but wouldn’t have unveiled the culprit.

We slip into these assumptions without even knowing we are doing it. With our church family, we might not have the foundation, history, trust, skill, or desire to do anything about it and assumptions will cripple relationships before they have a chance to grow. When Chuck assumed that I manipulated him into taking Hazel for ice cream by telling her about it first, THEN asking him, he then moved into the character assassination that I was being disrespectful and self-centered. He wasn’t willing to come right out and say THAT stuff because he is smart, but it was bothering him enough that he was grouchy. And if those things had been true, who could blame him?

With our church family, we might not have the foundation, history, trust, skill, or desire to do anything about it and assumptions will cripple relationships before they have a chance to grow.

Friends, curiosity has to win over defensiveness in our conversations or our relationships won’t grow and our churches will be crippled. Use this post-conflict break down to build your conversation analysis skills. Don’t be distracted by the accusations, and instead be persistent to find out what is really going on. It’s hard, but it’s not nearly as hard as the head-banging frustration of a difficult or broken relationship when your church is facing big challenges.

“By this everyone will know that you are my disciples, if you love one another” (John 13:35).

This blog was previously published on CHARIS.