Being Nice at What Price? 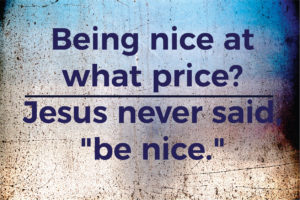 We have all experienced it.  One person gets their way over the majority—a “few” people, predictably, control decisions. Group decision making is multi-faceted involving long-term relationships, history, precedent, threat and fear. When final decisions come down to one person’s influence, opinion or dominance repeatedly, frustration and fear tactics abound. The rhetoric of fear is often masked as concern for unity, preserving status quo, taking a stand on a particular issue or the infamous, “I am concerned that people will leave.” The issue may change, the group dynamics, however, remain the same. Fear of conflict silences the majority. Even when new leaders are added in the hope of change, nothing changes—the culture of avoidance runs so deep that being nice is the default behavior. In short, being nice can become the DNA of a group that keeps it stuck.  If leaders fear change, the fear will permeate the whole system.  Believe it or not, the church knows if their leaders are afraid.

Fear of conflict silences the majority. Even when new leaders are added in the hope of change, nothing changes—the culture of avoidance runs so deep that being nice is the default behavior.

It may come as a surprise that Jesus never did say, “Be nice.” In fact, Jesus said many things in response to people that could in no way be considered nice. Think of conversations he had with his disciples. His frustration with their lack of faith prompting, “You faithless generation, how long will I put up with you” (Mk 9.19). Neither is nice a fruit of the Spirit. Nice is about being pleasant and agreeable. Kindness, as a fruit of the Spirit is a behavior and is not dependent on agreement. One can be very direct and kind. Often, being direct is viewed as being unkind. This is, for the most part false. It depends on the manner of communication.  One can be kind and take an opposing position with someone.  The dominant person gets their way because the group allows it. Remaining silent for fear of conflict and not speaking directly and in a kind manner only leads to more of the same. In other words, if there is a dominant person who controls, the others in the room are complicit—allow it to happen.

Speak in the first person, directly and calmly to the behavior of the one (s) that always get their way.

Leadership is about affecting the emotional field of a group.  The is particularly relevant in times of crisis, stuckness, bewilderment, and change with new conditions.  Peter Steinke notes what his mentor and teacher, Edwin Friedman, labels as sabotage when a person tries to make changes and is stone walled.  He says, “Someone at the top of the organization was being “too nice,” a “peace-monger,” or has been filleted of their backbone. That leader treats conflict as a foul odor—‘one whiff, on  goes the emotional gas mask.’ A highly anxious risk avoider is more concerned with good feelings than progress.”[1]

So, how should leaders function to transcend a culture of nice and stuck?

Is it difficult? Absolutely

Is it necessary? Absolutely

Is it healthy for the group? Absolutely

Is there a price to pay to remain stuck?  Absolutely

“If it is possible, so far as it depends on you, live peaceably with all.” Romans 12.14