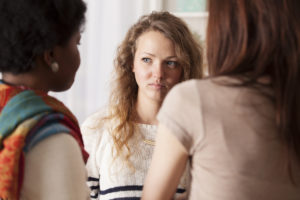 This semester I’m team-teaching a Sunday morning class called Difficult Conversations. The goal with this class is to teach and practice basic conflict management skills to help negotiate differences and controversial topics. Being able to have productive conversations with believers and nonbelievers about critical subjects that connect with our deepest beliefs and values is a rare skill. Quite frankly, most people aren’t very skilled at discussing differences that are on the surface level, so sharpening these skills is always a good idea.

For the first few weeks, we conducted a communication crash course using a combination of resources, but primarily the Bible and a book titled Difficult Conversations by Sheila Heen, Douglas Stone and Bruce Patton. We looked at the structure and content of a conversation, and of course, humanity’s arch nemesis, defensiveness.

Next we set up the case study conversations using topics selected by the class. The class voted on the topics to discuss: racism, abortion, gun control, gay rights, wealth/welfare, and immigration. Well, we asked for it, so apparently we had to follow through and find people who were willing to 1) participate in a conversation about these topics while 50 people observed and 2) let me be the communication referee. The case study conversations were designed to be as close to a natural conversation rather than a formal debate, understanding of course that this was a lab and, hence, decidedly abnormal.

When listening happens first, then a productive conversation can take place.

We did find willing participants; it helped that we have several attorneys in our church. And we set off to learn how to manage these controversial topics in a more Christ-like manner.

Watching these conversation lab rats was quite fascinating. As referee, I would start and stop the conversation, pointing out escalating nonverbal behaviors such as volume, pitch, and pace. Aggressive gestures, altered eye contact, and skeptical laughter were all present and accounted for. As the conversations progressed, it was helpful to take phrases like “that’s ridiculous,” or “bleeding heart liberals,” or “your president” and talk about the effects of the words themselves. In this stop-and-start style, I could deescalate the conversation and reset the tone. For other class periods, I would just let the conversation progress and then highlight the communication dynamics near the end of class.

Most interesting to me was the response of the class. Our whole focus has been on building communication skills. Each Sunday, we urge people to focus on the communication style differences, observe what might shut down the conversation, and study what is working well. The topics themselves are just a catalyst to be able to work on those communication skills that are so necessary for us to move forward as a healthy church family. But that is seriously difficult. People get so caught up in the actual controversy, their perspectives, and mainly what they want to SAY, that the communication study is kind of tossed out the window when someone gets a chance to speak up. What people are foaming at the mouth to say is ammunition for their side. Even my co-teacher felt he had to get in the last word at one point as class was coming to a close and actually mimicked an opposing statement by using a squeaky whiny voice! That was my cue as referee to stand up and say, “Don’t do that in an actual conversation,” which thankfully brought a big laugh and broke the tension.

Sadly, that’s what happens in a normal conversation. We know what we are supposed to do: stay calm, describe carefully, avoid insulting comments, and watch our nonverbals. But when we start talking, all of that is likely to be quickly forgotten. And, the bottom line is that relationships aren’t damaged by the disagreeing information. They are damaged by how we talk to each other and then our inability to talk to each other at all.

We have one class set aside for a “lessons learned” debriefing. My admonition will be the same as it was in the beginning. We must listen like our lives depend on it–because they do. Until it becomes our goal to understand another person’s perspective, there is no chance they will listen to us. When our goal is to listen and learn, we don’t really have to worry about aggressive nonverbal or accidental insults. It’s crystal clear when we want to listen sincerely. When listening happens first, then a productive conversation can take place.

This blog was previously posted on CHARIS